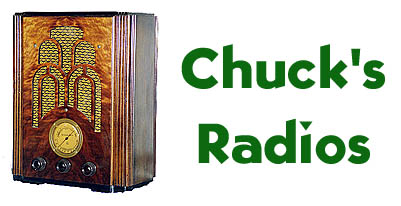 You can probably tell if you've been reading a bit about me -- for starters, I've been on the radio for 20 years (although I'm a semi-retired music programmer/DJ at the moment). I love doing that, but I also love the idea of radio, what radio does, how it works, the machines that produce it and the machines that receive it.  (And I never fail to rant and rave about how so much of what's on it is crap, but that's another story.)

I suppose a lot of it started with my dad, who told me stories throughout my childhood of his own childhood, seated beside the family radio and listening to great music and thrilling tales.  "Who knows ... what evil ... lurks in the hearts of men? The Shadow knooowwwsss ... muahahahahahaha!"  Dad did a great Shadow impression.

He told me stories of all his favorite shows, and showed me some of the really neato stuff he used to collect from sending in his cereal boxtops and Ovaltine labels to the network. Unfortunately, my grandmother threw all of this stuff away when my grandparents moved back to New Orleans from northern Alabama ... d'ohhhh!  (I swear, I'm going to find Dad a Tom Mix whistle ring if it's the last thing I do.)

And somewhere along the line I developed an interest in antique radios, particularly wooden-case radios from 1929 to about 1947. Postwar and early jet-age Bakelite and Catalin radios are cool, but I don't have too much of an interest in collecting those (I couldn't afford the Catalin ones these days anyway). I like things made of wood, for one. And in those early days, things like radios had a beautiful sense of design. Look at today's stereo equipment -- black boxes with a lot of buttons and crap on the front. Every damned one of them looks the same. They're completely utilitarian, and just plain ugly.

Radios from that era are beautiful. Not only too look at, either; I love the quality of the sound that comes through them, and they even smell good, too. It's a smell of age, of old cloth and wood, even the residue of 60-year-old dust that's settled into the chassis; a comforting sight and smell and sound. It hearkens back not only to an era of high aesthetic sensibilities in industrial design, but also to that great "theatre of the mind" aspect of radio, too. I find the presence of these old machines to be comforting in a variety of ways.

The first major radio in my collection wasn't really a radio anymore. My grandparents purchased a floor-model console radio in 1931, a Philco model 111 -- quite a beautiful machine! One day, either before my dad was born or not long after, the radio just blew up; the whole chassis was burned out and unrepairable. As this was not a cheap radio in its day, particularly during the Depression, Grandpa couldn't afford to let this go to waste. He removed the front panel of the radio, pulled out the chassis, added a shelf, refinished the entire thing, and made it into a bookcase. That bookcase was in my grandparents' living room for my dad's entire childhood, my entire childhood, and it is now in my own living room.

Unfortunately, my interest in old radios (intact, working ones) was just that for a long time -- an interest, something I just read about. I didn't come across too many, and when I did, they were either in rotten shape or horribly overpriced. I admit I didn't try too hard, simply because I thought I'd never be able to afford a hobby like this. Well ...

My friend Bill Tolbert told me about an evil, wonderful web site called eBay, an online auction house where he found some really neat stuff. After I got back from visiting him and a bunch of other friends in North Carolina, I had a look at the site, said to myself, "Hmm, I wonder if they have any old radios." And as a oenophile friend said when I started developing an interest in wine, "There goes your money, honey."

Actually, they weren't as much as you might think. (Well, one of them was. eBay is a great place to buy radios if you like paying too much money, although I found a couple of sweet deals). And best of all ... they're beautiful. Their presence is comforting. They smell good. And they all work.

As I mentioned above, my primary interest is in wooden table radios of the early 1930s to the mid-1940s, and one goal is to find the perfect console floor model. I'm partial to Philcos, Zeniths and Atwater Kents. I'm not generally interested in plastic radios or transistors, although there might be occasional exceptions. I like Art Deco stylings, and I like radios with the green "magic" tuning eye as well. I'll have a want list up fairly soon.

Click on the images for more pictures, and to read more about the radios. Keep in mind that I'm not an expert by any means (and I sure as hell don't know how to fix or restore these things), just a highly interested beginning and fairly avid collector.

Here are some links to good antique radio sites:

Antique Radio Classified
An excellent site and online version of print publication that's the bible of antique radio collectors, plus links to clubs around the nation, and more.
Antique Radios Online
Articles, listings, discussions, resources, links.
Atwater Kent Radio
THE site for information about Atwater Kent radios, produced until 1936.
The Classic Radio Gallery
Super-neat design, and a display of one collector's collection. Also features radios for sale, and schematics for many models are available for tinkerers.
Jeremy's Antique Radios
Jeremy Schotter's virtual gallery of his radio collection, with photos documenting the restoration process.
Nostalgia Air
Online antique and vintage radio references. Free online schematics, manuals, tube data, references and more!
The Online Radio Trader
Searchable antique radio ads for collectors.
Philco Radio.com
A.K.A. Ron Ramirez, the man who wrote the book on Philco radios. I like Philcos myself, and therefore like this page.
Northwest Vintage Radio Society
A site for collectors in the Pacific Northwest, edited by Rick Walton, another expatriate Louisianian.
Renovated Radios
Working antique radios for sale, plus vintage and reproduction radio parts.